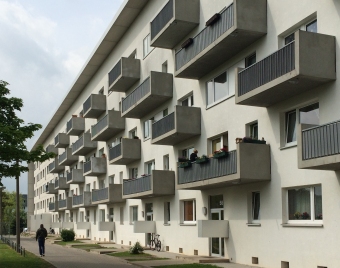 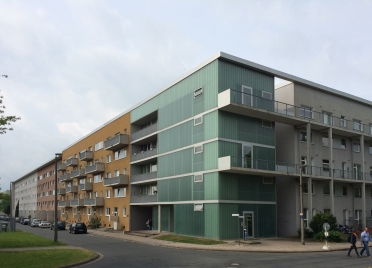 One of the few refurbishemnts with elevator

Leinefelde, is a small town in former East Germany that doubled  in population due to the construction of a large cotton mill in GDR times.  Nowadays the town is joined with Worbis to stay strong even in times of severe population decline. The population of Leinefelde has shrunk with the same speed as it grew after the Wende and after the closure of the cotton factory.  Leinefelde has since demolished large amounts of buildings. On the outskirts of Leinefelde Sud, the first large flats, that were only built in 1991, were already demolished again in 1998.

Thanks to a visionary mayor the city has had a very consistent policy, with architectural quality  high on the agenda. Now after several years of refurbishments in the southern city, the original plattenbau is hardly recognizable anymore. All the buildings have been either renovated or demolished.