Vauban is such a success that it is now seen as an area for the eco- elite unaffordable to most Freiburgers. Therefore, the politicians have decided not to continue with similar developments. The city now aims at densification within the city limits and at affordable housing. With Pieter we see some more and less successful examples. A number of recent less successful infill projects have led to increased resistance to densification. This makes it difficult for the city to generate support among the population for new developments. 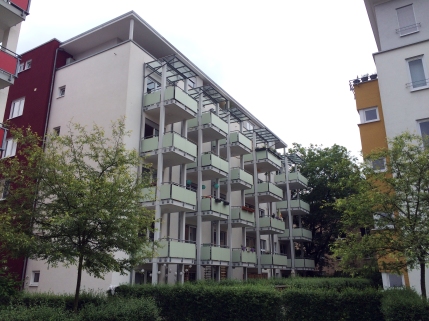 Densifying the city within existing urban fabric is a complex assignment. This is clearly a challenge for architects, careful densification demands integrated spatial solutions on all scales. When more volume is required a delicate architectural design is of great importance to make a project appreciated. Proof for this statements is found in one of the more successful projects; student housing in Seepark. This area, developed in the 60’s -70’s, is characterized by student housing in small towers with precast concrete walls in a green park. The new interpretation fits both in terms of volume as well as in the architectural expression very well in this context. 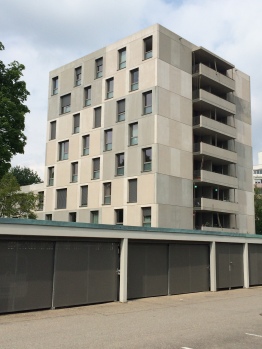 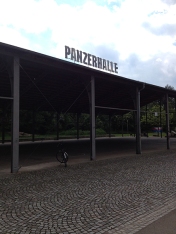 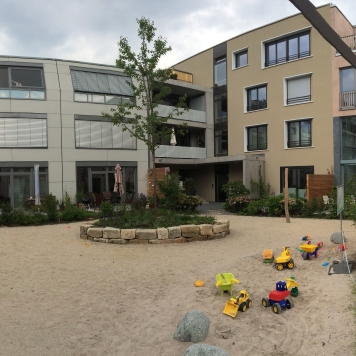 Nausassiche Heimstadt claims to have build the very first plus energy-apartment building in Germany in Frankfurt Riedberg, a large new housing area on the northern outskirts of the city.

Both the tilted roof and the closed parts of the south façade are completely covered in Photovoltaic cells which provide the single energy source of the full electric building. The building, which has a peculiar shape, due to the site, contains 17 apartments in different sizes. 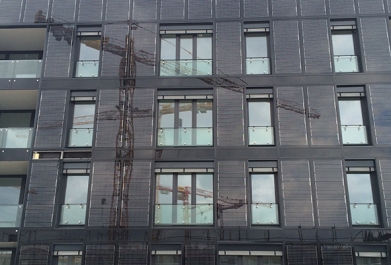 The nicest part of the building is the light and spatial central staircase. German fire regulations did not require a second or closed staircase, therefor the architects could make an open staircase with light from above.

A lot of technical spaces are integrated under the roof and in the basement: rooms for batteries,  air treat system, heating system, etcetera. An underground ice storage is used to warm air and water for household use. The apartments are  equipped with floor heating and heat recovery ventilation.
An underground parking is provided for ten electric cars. Calculations show that the building generates an energy surplus that could facilitate ten electrical cars to drive 13.000 km per year.

Building an  ‘energie-plus-geschoss-haus’  is a complicated assignment. This project is not an apartment building with additional installation technique, but a consistent design in which well integrated technique.  If the building fulfils its promises, then it shows that in order to build energy efficient, architectural concessions are not necessary in order to reach the energetic ambition.

Interesting is to mention that the competitive housing corporation of Frankfurt is building an even bigger ‘activ-stadt- haus’ in de centre of Frankfurt. If housing corporations compete with each other like this, these type of experiments can generate new integrated concepts and hopefully evolve into architecturally attractive mature energy efficient buildings.

Göteborg is a beautiful, vibrant city, yet it is also a socially and functionally segregated city. In order to accommodate the expected growth of the population, the city of Göteborg has made a vision. In the vision ‘Göteborg Rivercity’, the city has formulated the ambition to transform Göteborg in a city for everyone. ‘Rivercity Göteborg therefore needs to provide a mix of housing, enterprises, jobs, uses and public places that provide room for different expressions.’

The way in which Göteborg wants to achieve this is interesting. By involving the people of the city, but also professionals and institutes like the Chalmers University the city wants to make sustainable plans for the future development of Göteborg. Up until now they are doing that very well. The vision document is filled with pictures of workshops and quotes from the citizens. The big question is if they will succeed in keeping everybody involved and creating truly mixed areas in the building projects as well.

We have talked to Anna Braide Eriksson, a researcher on housing who teaches at Chalmers university. Chalmers is very involved in the development of the city. Students participate in the development of the city, for example in workshops on Frihamnen, one of the most prestigious development areas on the west bank of the river Älv. Chalmers also participates in ‘real’ projects as a knowledge partner. One of the examples is the project ‘Positive footprint housing’.
Anna is both positive and sceptical. She is very positive about the ambitions of the city, especially in regard to other cities in Sweden. However, she is quite sceptical when it’s about the potential result of this involvement. As an example she mentions Kvillebacken, where the ambitions of the city in order to create a mixed, but delicate and nuanced development of the area were not achieved. The small scale mix of social groups and small businesses that characterised the old area totally disappeared and, according to Anna, have now been replaced by the generic Swedish buildingtypology of 7 to 8 stories apartments. 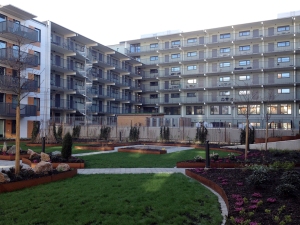 We also spoke to Josefine Wikholm and Susanne Clase of White architects, one of the largest architecture firms in Sweden. They emphasize that Göteborg needs better functional, social and economical mixed areas and therefor more typological diversity. Both architects live with families in typical Swedish apartments. They immediately add that luckily they also have a weekend house to get out of the dense city and small living space.

It is interesting that White has been acting as an initiator and developer of new typologies. In one of the Millionprogram areas, called Frölunda in the outskirts of Göteborg, they have developed the project ‘Äppelträdgården’. Together with the builder FO Peterson they have realized 19 terraced patiohouses for rent and sale.  This development was not completely without risks, but White found it very important to develop these new typologies and show that this innovation could actually improve the quality of the neighbourhood. For this project they won the Swedish Housing Award 2011.

Göteborg will select the first parties for development of Frihamnen this autumn. Frihamnen will be ‘the testbed for socially sustainable development’. Here the city wants to provide possibilities for new ways of living. It will be very interesting to follow the outcome of this process and see if these possibilities are taken up by developers and architects to generate new urban typologies and new living concepts. 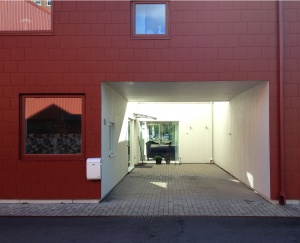 On our way from Stockholm to Oslo we passed a gigantic paper factory somewhere in Sweden. Big piles of trees were waiting to be made into paper. That is what happens to most trees in the Swedish wood industry.  Sweden has however a long tradition of building in wood. Wood frame building has been the main building technique for centuries. Nowadays Sweden builds mostly in concrete. This development started already before the so called Millionprogram that the Swedish state has initiated in the 60’s to fulfill the enormous postwar housing demand.
But the Millionprogram certainly has given concrete building an enormous boost. Today the Swedish building industry is dominated by ‘the big four’, building companies who all build mainly in concrete and who take care of the majority of the total building production in Sweden.
To us it is very surprising that a country with so many trees and such high environmental aims doesn’t build more in wood.

There are however some small countermovements. The municipality of Växjö for instance promotes building in wood. They call themselves the wooden city (http://www.vaxjo.se/trastaden/). Midroc Property Development has built Limnologen, an eight stories housing block, which was at  that time, in 2009, Sweden’s highest building in wood.
Växjö municipality challenged Midroc by offering them the possibility to double the building volume if Midroc would build in wood. Midroc hired Architect Bolaget, a local architect who was already experienced with building in wood. They cooperated with a manufacturer, specialized in wood construction. They succeeded in building an eight story building that fulfills all the regular technical requirements. Apart from a few extra measurements in concrete and steel that were necessary to make the building more heavy and to tackle windforces, the whole construction is made of cross laminated timber, also the elevator shafts.

Calculations of Folkhem, a municipal housing company from Stockholm, point out that building in massive wood is now around 15-20% more expensive than building in concrete, but a reduction of building time has not been taken into account. Midroc has however realized the project for a regular budget because they also operated as main contractor. The reason for this was not to cut costs but because no contractor was willing to take the risk for such an experimental project. The framework of the building was built by Martinsons Byggsystem, the manufacturer of the wooden construction elements. For the other part Midroc hired a small local contractor.
Production of wood construction is not at all optimized in Sweden. The capacity of factories is not used to its fullest potential. Building more in massive wood would definitely lead to lower costs and lower risks. On top of that, building in concrete is not at all as industrial as it used to be in the postwar era, according to Erik Stenberg, who researches the postwar housing period at the KTH. The environmental specialist from one of the big four construction companies has supposedly stated that they produce 2,5 tons of waste for each apartment.  Industrialized building methods have been replaced by low payed workers who build on the site.
We have been told that Folkhem Is going to build only in wood. That sounds like a brave and ambitious statement in the Swedish context. They have recently finished their first wooden highrise building in Stockholm after the design of Wingård Arkitektkontor in the area of Sundbyberg.
Also Anders Persson of Midroc states they are working on more buildings in wood. So there are some good signs, but still the question is if also the powerful concrete builders will seriously develop  other, more sustainable ways of building. 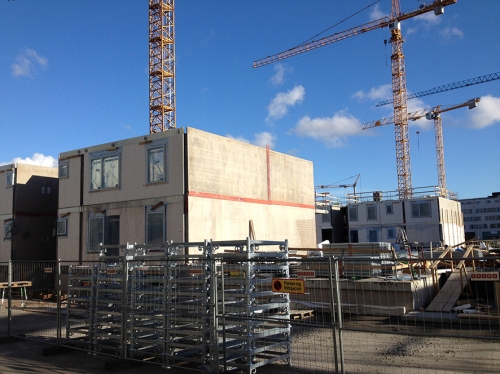