The second postcard comes from Bobigny, a small town in the middle of the poor north-eastern part of the Métropole du Grand Paris. This is the area where in 2005 the famous Banlieu riots broke out. We cycle through Bobigny in search of a few Grand Ensembles, large concentrations of social housing, built in the 60s and 70s. 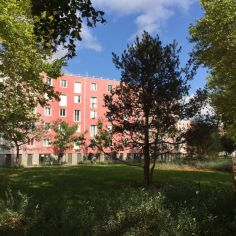 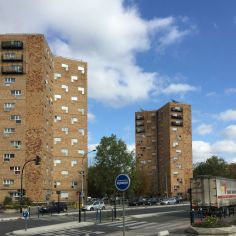 The first project we encounter is Cité les Courtillières-Le Serpentin designed by Émile Aillaud from 1954. Seen from above this is a fairly extensive neighbourhood, consisting of an endless winding building around a courtyard of 500m x 200m, and two clusters with residential towers.
We speak to one of the four complex managers of Le Serpentin. He is present on site daily from 9 to 5 and knows all the inhabitants of the 600 houses in the complex. He tells us that the renovation of Le Serpentine, funded by the ANRU, a national renovation program, is almost complete. The façades are insulated and lined with subtly coloured tiles, the elevators have been renewed, the houses have been renovated inside and PV panels (which, actually do not work yet) are placed on the roofs. The central park of 4.2 ha will also be completely renewed. A small piece of the long pendulum has been demolished to improve the connection of the complex with the surroundigs. The layout of the public space looks much better with more abundant planting. Previously there was only grass and trees. The new playing area for children is already being used.