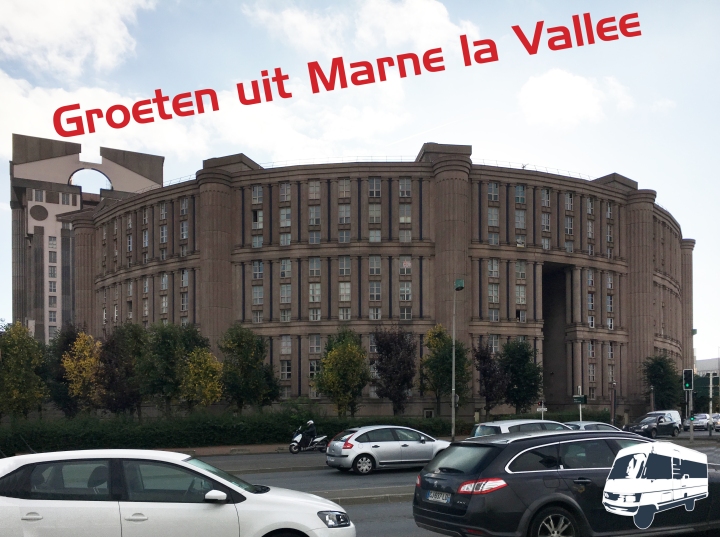 During our research project ANA goes Europe, we investigate the role of the architect in the future European housing assignment. The trip we made this autumn led to Paris and its suburbs. The French solutions for matters such as living quality, densification, transformation of the Grand Ensembles and gentrification are instructive for the Dutch practice. The fourth postcard comes from Les Espaces d’Abraxas, the illustrious housing project of Ricardo Bofill in Marne la Vallee.

At the time the Dutch government incorporated the growth centres policy in the Second National Spatial Planning Policy Document (1966), the French government was forced to deal with an enormous housing shortage top-down. This is how the plan for the Villes Nouvelles derived. There are five around Paris. The largest is Marne la Vallée with almost 300,000 inhabitants, consisting of no less than 26 municipalities.

We visit the very first part of the new city that was built at the beginning of the 80s: the quarters Monts d’Est and Pavé Neuf both located in the commune of Noisy le Grand. These two neighbourhoods are located next to the A4, which connects Marne with Paris. The distance from Noisy le Grand to the Paris city center is only 20 kilometres. On the edge of Monts d’Est is Les Espaces d’Abraxas, a megalomaniac residential complex designed by Ricardo Bofill.
This project, extreme as it is, has regularly been used as a movie decor in science fiction productions such as Game of Thrones and Brasil. Les Espaces consists of three components: the Palacio, Theater and Gate. The Palacio in particular is an extreme residential building, a high, dark cavernous gap in precast concrete opens up to 441 single-sided oriented apartments.

Current problems
Les Espaces is in a poor condition. It is badly maintained. The public areas are dark and dirty and there is no supervision at all. We can imagine that people do not feel safe here. The project is completely isolated, on the one side it is restricted by a large parking garage and on the other by a busy access road. Because of these poor conditions it was investigated whether the project could be demolished, but this idea had been abandoned on grounds of high costs. In addition, some 600 households should be housed elsewhere. In order to improve the situation the municipality of Noisy le Grand opted for a different strategy. A continuous park strip must connect Les Espaces with the other parts of the area and bring more transparency to this densely built-up concrete neighbourhood.
An advantage of the planned park is that it also connects the new residential area, planned on the other side of the ring road, with the city centre. Very good ideas, but not yet an actual solution for Les Espaces.

We call Bofill!
Because Les Espaces d’Abraxas is such a characteristic project, the municipality Noisy le Grand asked the architect to think about the improvement. Ricardo Bofill (RBTA) initially was not interested. After he had met some of the proud residents of Les Espaces during a community festival organized by the municipality, he turned and accepted the assignment. It is very striking that in order to ‘finish’ the project he proposes to build up the same style on both sides of Les Espaces. However, its symmetrical design goes straight through the park planned by the municipality. It is not entirely clear how that is to be solved.
Unfortunately it is unclear what Bofill’s plan is for the existing building. We will have to wait and see if he is able to redesign the building in a way that solves the various problems. The chosen approach converts one of the weaknesses of Les Espaces, the isolated location, into a force. By using the free space around the building for more varied new buildings, a larger social mix can arise in the neighbourhood. 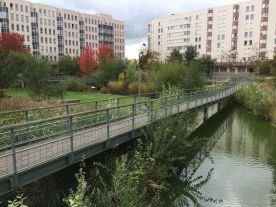 Pavé Neuf renewed
In Pavé Neuf, the adjoining neighbourhood, the renovation has already mainly been carried out. Again, the known range of interventions is visible. Just like in Monts d’Est (the neighbourhood of Les Espaces) this district is extremely impenetrable due to the layout with parking garages on the edge and a completely car-free centre. That is why some breakthroughs have now been realized. There is a high level of investment in public space. In Pavé Neuf, for example, a large new neighbourhood garden has been realized on the site of a parking garage. The buildings have also been insulated and refurbished. Pavé Neuf is already very dense, therefore it lacks space for new buildings.
As in Bobigny, it is striking that the approach shows a great respect for the original architectural and urban plans. Everything looks refreshed, but the question is whether there is sufficient improvement in the socio-economic field.