This winter it was too cold to go out camping with the ANA goes Europe camper. So, when we had the opportunity to visit Bavaria in the South of Germany in order to meet local stakeholders in housing and architecture at the 13th Coburger Wohnbautag, we took the plane instead and gave a lecture on our ideas and experience on the theme of this day: The future of single family housing.

The single family home
In Germany as well as in the Netherlands, in the second part of the 20th century the family home has been considered to be the ideal way of living.
In the Netherlands we have single family homes in all sorts, varying from the very small workers homes in 19th century urban areas, to the wide and light ones from the early seventies, the cheap and narrow ones from the eighties and the technically better, but spatially similar ones from the nineties.
The last period of massive rowhouse production, the VINEX,  is just behind us. The economic crisis of 2008 has forced us to stop and rethink this ambition to produce as many as possible cheap houses in the outskirts of the city, for the better.
Also Germany has a lot of Einfamilienhäuser, especially from the period 1950-1970’s. Unlike  the dominant presence of the rowhouse in the Netherlands (60% of all households live in a rowhouse), in Germany the detached house is the most common typology for single family dwellings.

Lecture at the 13th Coburger Wohnbautag

Smaller households
In both countries a lot has changed. Society today looks totally different compared to the fifties, sixties and seventies. The traditional family, of a couple with two kids, has become a rare minority in a very diverse population.
In the Netherlands the two-parents family forms only 28% of all households. In Germany this is even less: 26%. Clearly, part of this development is caused by the aging population. But apart from that there are many other developments that create smaller households. We have less kids and we have them later. Present day young generations are even worse in guaranteeing offspring. Forming long term relationships is more and more problematic for the very demanding, hedonistic and young generations. That is what Jan Latten, professor social demographics at the University of Amsterdam has stated at the Expeditie Begonia, an inspiration day on ‘living variations for the elderly’ organized by Actiz Aedes. This results in less children on the long term. Divorce also adds to the increase of small households. In 1970 20% of marriages ended in divorce within 20 years, in 1995 this percentage has risen to 25%. [i]
You can imagine the consequence: huge under occupied family homes inhabited by lonely singles in neighborhoods that are fully equipped for the young family but totally not suitable for the aging singles (and couples). 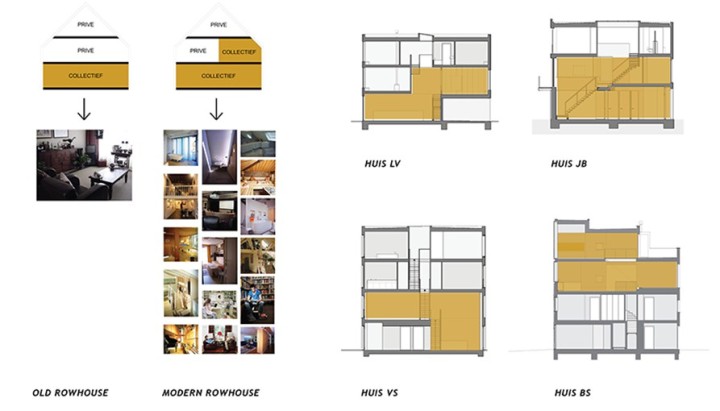 Microliving and /or collective living
We need smaller homes, less to maintain less to pay for, more practical, more affordable.Of course we can fill the cities with mini apartments, container homes, plugin towers etcetera, but this leaves us with two important questions. How do we organize social interaction and prevent loneliness? What are we going to do with the enormous amount of single family homes we have built in the recent decades?

German experiences
In Bavaria the Bayerisches Staatsministerium des Innen, für Bau und Verkehr has initiated a modellproject ‘Revitalisierung von Einfamilienhausgebieten’. In three towns in Bavaria strategies are being researched and tested. Manuela Skorka of planungsbüro Skorka works on these three pilot projects and presented her findings at the 13th Coburger Wohnbautag.The developed strategies are aimed at the aging population, taking away barriers, creating meeting points, adjusting the housing stock and develop new housingprojects more suitable for elderly.The results are not visible yet, since the project is still in the development stage.

Case Almere Waterwijk
With the research team ‘Grijstinten in de tussenmaat’ we have been working on this theme in Almere Waterwijk, one of the oldest neighborhoods of Almere.  Waterwijk is very homogenous: 70% of the houses is owner occupied, 83% is a rowhouse. Waterwijk is expected to age strongly in the coming years. A lot of the first inhabitants of Waterwijk are still living there. Their children have grown and moved out on their own, leaving the parents alone in their single family home. The municipality of Almere has turned Waterwijk into a pilotarea for seniorproof living. They have asked the team of Grijstinten to think of strategies to deal with the existing housing stock in a strongly aging neighborhood. 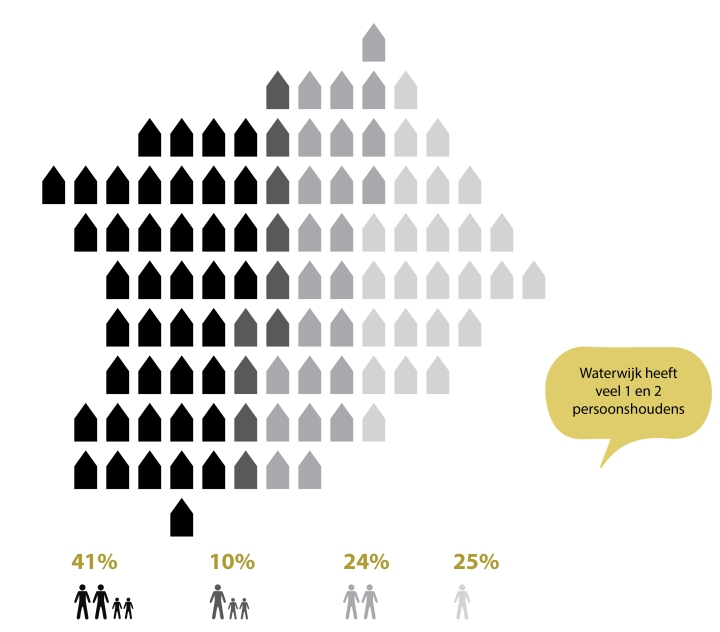 In several workshops with inhabitants over 55 we have been discussing possible strategies. Immediate problems can be solved with simple adjustments such as stair elevators, but this still leaves future generations with a big problem. The amount of families in all of Almere will decrease, there is very little supply for smaller households. So there is a need for a long term and top down transformation strategy. We have introduced the ‘Waterwijk Neigborhood Cooperative’. This Cooperative can provide loans to facilitate individual adjustments. The cooperative can gradually buy, transform and sell or let existing rowhouses. Banks, municipality, private investors and the house owners can become shareholders in this cooperative that will also facilitate where necessary the social infrastructure in Waterwijk.  In the coming period the project will be developed further.

Future
Pilot cases have started on different sites as stated above.  Some municipalities feel already the urgency to think about the future of existing single family housing areas. Hopefully these pilots will deliver useful and workable strategies that can be used in the many older single family housing areas we have in the Netherlands that face aging and downsizing households in the near future. Apart from that, these pilots should also feed awareness in new building programs. It is awkward to see the municipality of Almere think about adjusting family housing in one neighborhood and facilitating the building of large amounts of these types in other areas.