The demand for dwellings in most Swedish cities is enormous. Stockholm in particular has to deal with a huge demand for living space. Until 2030 the amount of 140.000 houses has to be built in the Stockholm region. Politicians put a lot of pressure on the production dwellings in order to be able to house all the citizens. Due this enormous pressure the housing prizes in Stockholm are very high.

This pressure on the housing market makes it hard to realize urban and architectural quality in new housing areas. High density is inevitable when land prizes are high. Striking is that in Stockholm the municipality owns most of the land, Nevertheless, the struggle for housing quality is a hard one.

The building industry in Sweden is dominated by four big building companies who build around 80 percent of the total housing production. They operate both as developers and as total entrepreneurs.  In Sweden, a total entrepreneur takes over the whole process , from design to building, after tendering. This situation differs a lot from other countries. For instance Denmark has around eighteen bigger building firms. These big four Swedish companies have a strong lobby in politics and have a lot of influence on the building sector in Sweden.

We have talked to Anna-Stina Bokander, coordinating project manager for the municipality of Stockholm on the new development area Norra Djurgårdsstaden. This area around the royal Seaport on the eastside of the city is one of the biggest developing sites of Stockholm.
The plots in Norra Djurgårdsstaden are sold to developers and municipal housing companies. In the first phase of the development the plots were sold for the highest prize. In the second phase this strategy has been changed, in order to  generate more spatial quality and more architectural variety. Prizes were fixed by the municipality and the developers were selected through a competition on quality. In this phase the plots were also smaller, in order to create more space for smaller developers and builders. The plans that were selected show indeed a greater variety in comparison to the projects in the first phase.

But the projects of the second phase are not built yet. There is still the risk that a lot of quality is lost in the building preparation phase. In Sweden, architects get an assignment to make a design, but are often not involved in the later stages of projects. It is very common that the projectering, as they call it in Sweden, is done by another, cheaper architect. The original architect plays no further role and is most often not consulted when things are changed in the project, which of course is very likely. ­ All Swedish architects involved in housing complain about this phenomenon.

Still, if you look at this discussion from a Dutch perspective, the Swedish situation is a bit strange. One wonders why there is so much pressure on land and why everyone complains about lack of housing qualities. After all, Stockholm has enough space. It is one of the greenest cities in the world. The city owns most of the land and has the tools to challenge developers to set a standard to housing qualities.

Looking at Hammarby Sjöstad, a very centrally located development area from the ‘90s and 00’s, it seems that the city of Stockholm does have the capacity to make very attractive living environments. In Hammarby Sjöstad the city has developed a dense, mixed living area with good public transport and foremost great outdoor qualities. However, also in Hammarby Sjöstad it is clear that Swedish housing architecture is a bit boring and much of the same. Typological innovation is very scarce. New concepts for urban living patterns do not seem to be developed. So there are some challenges to deal with, but, from a Dutch perspective, it doesn’t look like a mission impossible at all. 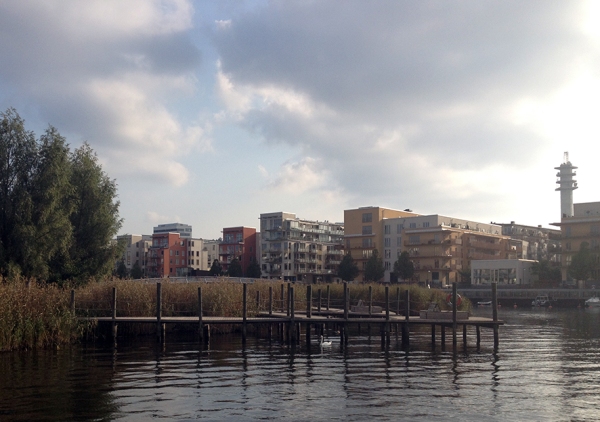